The Ability to Recognize the New

One of the more recent and important questions here at Unbecoming and Undisbecoming has been, "Are we capable of recognizing the new?" Meaning that, as we are capable of seeing and saying, can we effectively describe an important change in attitude, a shift in the productive, generative spirit of our time or the general appearance of a content that demands a new form?

The question arose in regard to Undisbecoming's recognition that Erich Auerbach, in his brilliant work of historical literary criticism, Mimesis, was, despite his immense penetration into literature's relations between the individual and the social, yet unable to understand Virginia Woolf's new approach to narrative, as the previous generation's novels of realist and naturalist inclination suddenly gave way to modernism's destabilized frames of reference.

Unbecoming, clearing his throat, stated that he felt that, given his academic training, the critical models he'd inherited, and his ongoing study of "the classics", he was less equipped to recognize or even be aware of what was emerging as definitive of the contemporary moment in literature and art (and music, too!). But, he thought to himself, he once believed that he had understood what the new would require.

Undisbecoming then said that we didn't even have the language to say what the new looked or felt like.

Unbecoming, as is his wont, then went into a long explanation about his growing discomfort over the texts he was using in his teaching, in that he was uncertain they were going to be the best means for his students to grapple with the current situations, those that troubled us all.

Undisbecoming, with a tear forming, but not from sorrow, then explained how the current conditions could be seen as hopeless, and that, as far as she could tell, it meant that we had to think in terms of catastrophe.

Unbecoming then, once again, began one of his apologias for his attitude towards popular music, film and literature, by saying that it (his attitude) had been formed in a crucible of mistrust over pop culture's history of merciless exploitation, and the means that a music industry has to decontextualize the structures of feeling that a shared & social musical performance creates, in order to make that music mean anything it wanted it to.

They then talked about Flaubert, Stendhal, Balzac, Thomas Hardy and D.H. Lawrence.

Undisbecoming had heard a song wafting from a car on Atlantic Avenue a few days ago and liked it, and Unbecoming was anxious to hear a song that had been recommended to him. They discovered that it was the same song. They listened to it. It was the new jam. 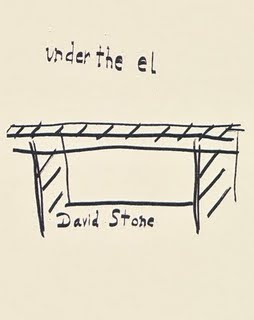