The Next Big Thing Questionnaire

Poet and ecologist E.J. McAdams tagged me to answer: 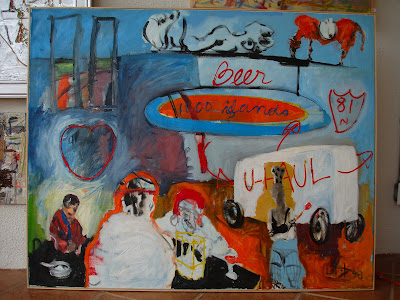 Painting by Peter Fowler. circa 2007.

What is the working title of the book?

As I was writing it, it was entitled “To Becoming Normal”.  Since its completion, it carries the title “A Normal Line of Work”.

Where did the idea come from for the book?

I had hit on a measure (for the line of the poem) that I found endlessly creative and beautiful. Writing with this form was for me a very distinct and productive experience, and I was almost always surprised and pleased by the results. So, to be brief, the idea came from my writing of poetry over all the years previous to it.

What genre does your book fall under?

It is a poem, a long poem. I amused myself with a new label at the time: literary pointillism. Something radical, integral, but clearly just a drop in the bucket.

What actors would you choose to play the part of your characters in a movie rendition?

I would choose the first group of people who could stage it, if each actor took a section and commited it to memory.  There needs to be an instrumental component, but outside of ballads and what I consider pop music, I am not a composer. I know it has performance potential since it was best realized as a theater, or performance, event back in 2008. But it is a book.

I like Alec Guinness a lot, and James Stewart, Harriet Andersson, Julie Christie. I’m not quite up to date on A-list actors. Why don’t you ask who I’d like to make the movie?

What is the one sentence synopsis of your book?

“A Normal Line of Work” is a long poem-as-score for musical and theatrical performance, coordinated between the extremes of pure music and recitation.

How long did it take to write the first draft of the manuscript?

Who or what inspired you to write this book?

Poets—early companions—Major Ragain, Alice Cone, Kathy Korcheck, Jayce Renner, Adam Brodsky (the Cleveland poet, not the anti-folk guy), then purely historical sources—Kenneth Patchen, bpNichol, and so on—hundreds of poets I heard at readings before I quit the scene—I guess those who provided me the space and time to work as a poet for as long as I did with such concentration (sadly, I do currently work at that level)—the poetics program at Buffalo: Robert Creeley, Susan Howe, Charles Bernstein, Dennis Tedlock, those I worked alongside—Michael Basinski, Kristianne Meal, Jonathan Skinner, many many others. Though my writing process and aims were, in my view, vastly different than his, the master then and now of the short line is Tom Raworth—this was made clear to me only when the book was nearly finished. All the best poets I read and listened to understood this kind of weighting of sound and silence, textual space and writing. But I was continually inspired by friends and loved ones who supported me as a poet in Buffalo.

What else about your book might pique the reader’s interest?

We might wonder if the United States will ever understand the disastrous problems and self-inflicted wounds it faced in the years 2001-2008. Many Americans do seem to recognize the severity of our crisis in some places, but too many continue on in ignorance of chronic inequalities and injustices in many others. I think my choice to work and live as a poet at that time was either ridiculously foolish or uncommonly brave, depending. Poets, for good or ill, are tuned to completely unexpected ranges of impression, and in writing my poem at the level of seriousness I then had, I was truly happy to have written the book for what I was learning and able to convey. I haven’t had that assurance since—and once I knew it was done, I didn’t know what was to come next. I don’t know that I’ll be as close to a combined feeling and structuring of music in the line ever again. Because I didn’t know exactly what to do with it—so that it would lead to a further development in my writing—I didn’t travel with it or share it with audiences in any big way. Also, once it was finished, when I saw most supports for myself as a writer crumbling away—both internally and externally—I stopped trying to go on with poetry as my only serious work. I could muddle along as a clerk or marginalized, adjunct professor. The sense of my feeling that poetry was all I had may be in there—the feeling that, while those closest to you accept you and support you, there is a malicious ocean of discouragement awaiting you for sticking to your art without obeying the orders of alternately ignorant, commercial, bureaucratic & totalitarian forces, even in our beloved fine arts communities.  I guess it might pique your interest that I’m not screaming through the flames, I’m trying to live a relatively boring, middle-class life as a poet and performer. The absurdity of that might twit your boutonnière. But look, when even loudmouth poets stop taking poetry seriously as the best of our intellectual and emotional efforts, then what the hell kind of reception will poetry get? You’re probably too busy trying to feed your kids or punching the clock to drift off on my mad trips, anyway.

Will your book be self-published or represented by an agency?

What a great question. I saw in another magazine the question “Paper or plastic?” put to an author—are you an ideologue of print or digital? Ha ha. I was making laser-printed, stapled chapbooks at the time I was writing “A Normal Line of Work”. I had a poetry press. It would be nice if my poem were in a book that someone could check out of the library or buy in a store, that Small Press Distribution could send to someone if he or she ordered it, or that I could send out if it was ordered from me. I know now that I am much better off just working on my writing, rather than trying to handle the manufacturing or publicity end of things, trying to wedge it into people’s brains. If there are any publishers who like the idea of making a beautiful, printed volume better than keeping a balanced budget, they’re welcome to contact me and we can set it up as a project. The poem is also somewhere on this blog, under the title “A Long Poem,” but it really belongs in a book. I’d love to perform it again, with my jar of honey, the stamp-pad tattoos, the guitars and all the interruptions, ‘at any point’.
Posted by Douglas Manson at 6:24 AM